🐔 Can you handle the rubber chicken? 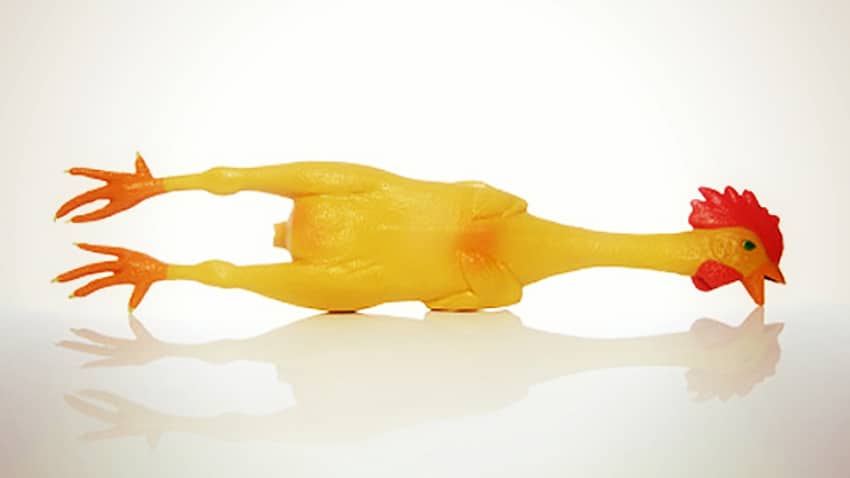 Have you ever been going along in your life and marriage just fine, and then out of nowhere something (or someone) disrupted your flow?

I refer to that as a rubber chicken.

The name came from an exercise where a facilitator had a group of people tossing a tennis ball from one person to the next. The goal was to see how quickly the group could toss the ball to each other without dropping it.

The facilitator started with one tennis ball. No problem.

He added a second ball. No problem.

He kept going until there were five balls circulating the group. Folks had no problem handling the tennis balls, and quickly settled into a rhythm.

Out of nowhere, the facilitator tossed in a rubber chicken.

The rubber chicken was a surprise, obviously not a tennis ball, and totally broke the rhythm the group had established.

It was a great lesson for them: just when you get into a rhythm, a rubber chicken will come along to shake things up.

I'll tell you more about the group in a minute.

But first, you can probably think of countless rubber chickens that have hit your marriage.

Maybe it was cancer, a child in trouble, a job loss, or an affair.

Perhaps it was the inability to have children, or an addiction, or in-laws moving in, your spouse telling you he/she no longer loved you, or a mate walking away from faith in God.

No matter who we are, we're not immune to rubber chickens.

In fact, as long as we're alive, we'll attract them.

That's just the way it goes.

Since rubber chickens are bound to happen, we'd be wise to expect them, make an allowance for them, and learn how to be resilient when they arrive.

If you grow weak when trouble comes,

your strength is very small!

I don't mean to be prophet of doom, rather a voice of reality: the rubber chicken is coming.

Now is the time to secure your faith in God, know your own skills and abilities, and strengthen your commitment to your mate and marriage.

The rubber chicken threw group for a loop. BUT, when they expected it to be a part of the exercise, they prepared for it, and handled it well.

By the end of the exercise, the group tossed seven tennis balls and rubber chicken among 21 people in less than 25 seconds.

They adjusted and slayed it.

The rubber chicken is coming.

Will you be able to handle it?