Are you a control freak? (Is your mate?)

Yesterday I wrote about the reality that we cannot control everything.

I'd like to take that thought a step further today.

There are two camps when it comes to involvement: those who try to control everything, and those who couldn't care less.

Both of these extremes will harm a marriage.

Folks typically move to the apathetic camp after they've gotten tired of trying (and failing) to change their mate. They're just like ...

It's worth noting that getting to a place where you throw your hands in the air (and wave 'em like you just don't care!) is just as dangerous as trying to orchestrate every single situation.

Both lead to trouble.

Like other parts of life, the extremes rarely yield good results. There's much better success in the middle. 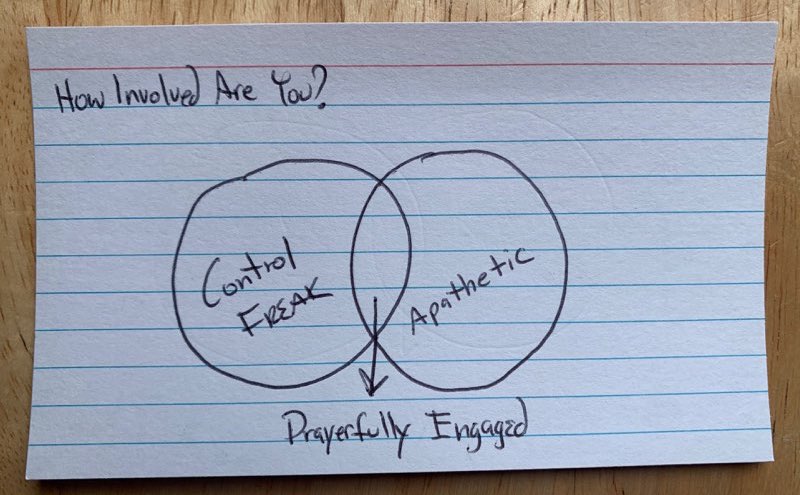 As the illustration shows, the middle ground of being a control freak and becoming apathetic is being prayerfully engaged.

Prayerful because it shows you understand God is sovereign and exerting his holy influence, and engaged because you realize that doing nothing leads to nothing being done.

I received an email from Barbara, a wife who knows the difficulty of trying not to control while staying away from apathy (look for the world "actively" in her message).

I know that I receive the grace of God daily and I try to extend grace to everyone I encounter, especially my husband. If I cannot show grace and love to the people in my house then I feel like what I show outside of my house is not for God's glory.

I once had a marriage mentor tell us that in the Christian faith, particularly with our spouses, we have to meet them where they are in their walk.

This is incredibly hard to do sometimes but that is my goal every day. I actively try to meet my husband where he is in his walk. Doing so actually helps me to see him as a vulnerable human and not someone who intends to harm me.

I love Barbara's message. It shows a picture of God's grace instead of controlling everything. it shows being prayerfully involved instead of being apathetic. Seeking to meet our spouse where he/she is instead of having unreal expectations about where they should be.

As Barbara noted, this is incredibly hard to do sometimes. But, with God's help, we can do it.

Until tomorrow, remember, you're one step away from making your marriage work. Take it.

ps - I love to hear feedback (good or bad). Reply and tell me you reaction to this email. I read every reply.

pss - know someone who needs help in their marriage? Give them this link: http://marriage.works/inspiration