The Law of Stupid People

Don't be caught unaware. Knowing is half the battle.

The Stupid Are Everywhere

He is famous for writing, "The Basic Laws of Human Stupidity."

Learn them. Know them.

Understand them deeply and your life will become much easier.

These are Cipolla's five fundamental laws of stupidity:

Corollary: a stupid person is more dangerous than a pillager.

As is evident from the third law, Cipolla identifies two factors to consider when exploring human behavior:

Benefits and losses that an individual causes to him or herself.

Benefits and losses that an individual causes to others.

By creating a graph with the first factor on the x-axis and the second on the y-axis, we obtain four groups of people. 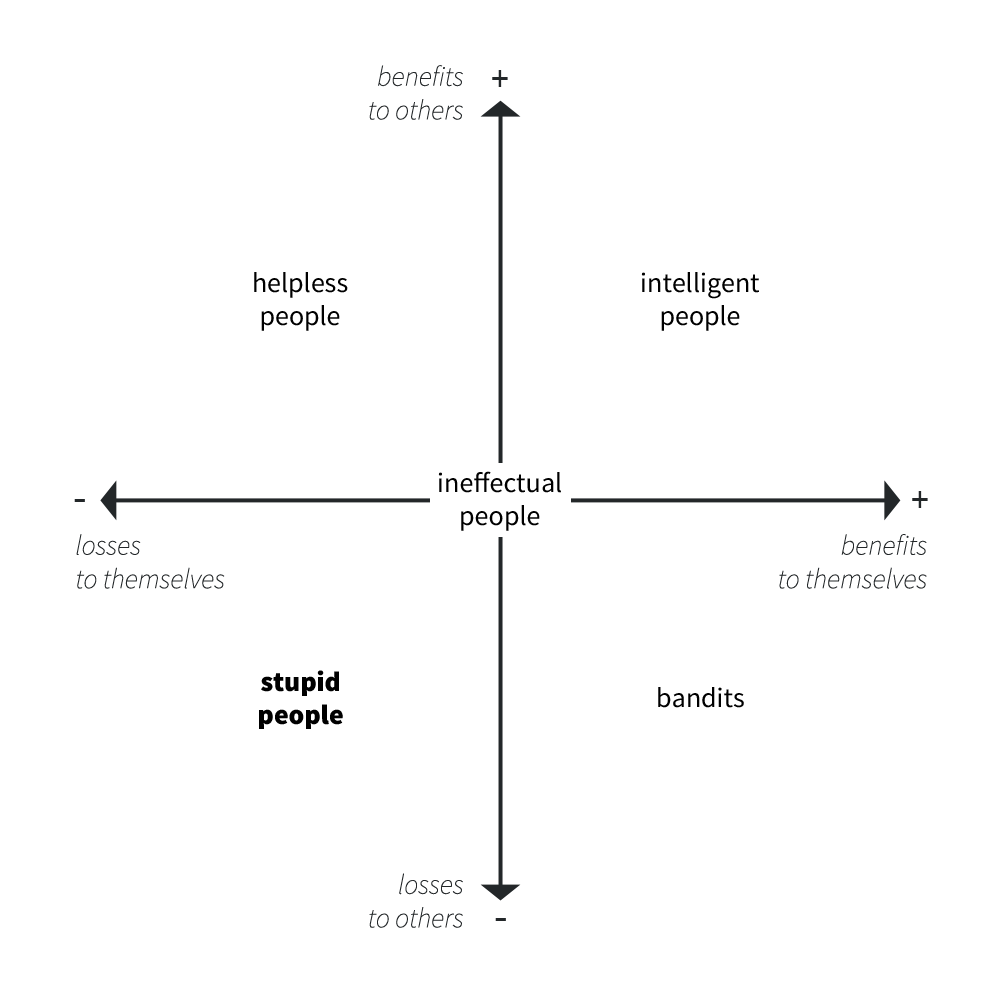 You should also be familiar with another facet of the stupid.

The Dunning–Kruger effect is a cognitive bias in which people with low ability at a task overestimate their ability. They have an illusionary superiority.

The truly stupid often believe they are brighter and make better or more-moral decisions than other people. They have a cognitive bias that hides the fact that they are hurting themselves and others and this is usually combined with a victim mentality.

Their self-inflicted problems are things "happening to them" and not caused by their bad decisions and actions.

Many also lack an inner monologue.

There is no voice inside their head. This is something that most people will find disturbing. Can you imagine going through life making decisions without having an internal voice?

Let's Get Back To The Groups In Our Graph

Helpless people - contribute to society but are taken advantage of by it (and especially by the "bandit" sector. Extreme altruists and pacifists may willingly accept a place in this category for moral or ethical reasons.

Intelligent people - contribute to society and leverage their contributions into reciprocal benefits for themselves and others. They are a net gain to the standard of living, and improve the planet for us all. This is the group we're in. If you aren't in this group or are not trying to become an intelligent person, just unsubscribe now. There's a link at the bottom.

Stupid people - are counterproductive to both their and others' interests. They think they are smarter than others and are just victims of circumstance. Stay away from these people.

Bandits - will pursue their own self-interest even when doing so poses a detriment to others. Stay away from these a-holes at all costs. I give you permission to shun them.

No one goes broke helping other people achieve their dreams.

Living your life in service of others makes your life better. Fact. Don't believe it, try it for a couple years and then get back to me.

“Metcalfe's Law” says that a network's value is proportional to the square of the number of nodes in the network.

This means that the more people in a net-positive network like a community or networking group, all working as intelligent people, will have a greater effect than all those people working individually... and will benefit the entire community around them.

Understanding that stupid people are everywhere, regardless of their other traits or qualifications allows you to more easily diagnose their stupidity and move on to working with or being friends with someone else who's not an idiot.

Now go forth and be profitable.

P.S. My Inbox Mastery Email Marketing Course is on sale for $49. https://hookto.us/inbox

Stories, Marketing, and Sales Advice Delivered Weekly to your Inbox.

Get my BEST updates delivered to your inbox. Join the email list and get my favorite content, events, videos, and writing regularly. Unsubscribe anytime.