For more information go to: nationwidewalkout.com

Los Angeles, CA Nov. 9, 2021  Recently firefighters, police, doctors, nurses, engineers, teachers and people from all walks of life have taken a stand — and said “NO” to employers mandating the vaccine. Across the nation and abroad, people are rising up and speaking out in unity against vaccine mandates, as did the Fifth Circuit Court of Appeals last Saturday when it cited “grave statutory and constitutional concerns”—and stayed the mandate pending more hearings.

This is the moment in history when we take back our God-given freedoms — or risk losing them forever. The tipping point has now been reached in this country: for four consecutive days, employees are striking against companies mandating the vaccine. Join the Nationwide Walkout & Stand for Freedom!*

Human Rights Attorney Leigh Dundas has been the voice for this Nationwide Walkout across America. Leigh has been in practice for over 27 years. Leigh has been working independently during the pandemic for rights of citizens, speaking across the country to stand for ’We The People’ with such influencers as General Michael Flynn and Robert Kennedy Jr., an environmental attorney and founder of the Children’s Health Defense Fund.

For more information about Nationwide Walkout across America Nov. 8-11th or to contact Leigh Dundas, go to:

In San Francisco on Veteran’s Day Nov. 11th, Americans of all creeds and colors will be united to rally and march for No Vax Mandates. The rally and march will take place from 3pm-6:30pm starting at the Roundhouse Café which is adjacent to the east entrance to the Golden Gate Bridge. Speakers including Human Rights Attorney Leigh Dundas, Dr. Stella Immanuel, Hawk Newsome (BLM NY), Reinette Senum, survivors of communist regimes, and more, will be featured, after which a peaceful walk to the Golden Gate Bridge will take place. This epic and unprecedented event will be held the afternoon of Veterans’ Day, November 11, 2021. The rally represents the culmination of four days of striking by rank and file workers everywhere. Employees both blue collar and white collar -- workers of every race and nationality, every sexual orientation and religion and creed – are standing united despite their differences on one common truth: that vaccine mandates have no place in a truly free society. And that no government should condition employment on them, nor target children with them.

To do so is not just immoral, and unconscionable, it is innately unjust.

That is why Americans from groups including BLM-NY and pro-medical freedom, LGTBQ+ and straight, Black, Latinx, Asian, Native American, White, Jewish, Muslim, Christian and atheist – people from all walks of life – are setting aside their differences to simply state:  vaccine mandates will no longer be tolerated. A truly free nation is governed of the people, by the people and for the people. And today is the day that we -- the people of this great nation -- retire vaccine mandates and return to a State of Freedom.

*Not applicable to employees who by law/contract are not allowed to strike. Nothing herein constitutes legal advice 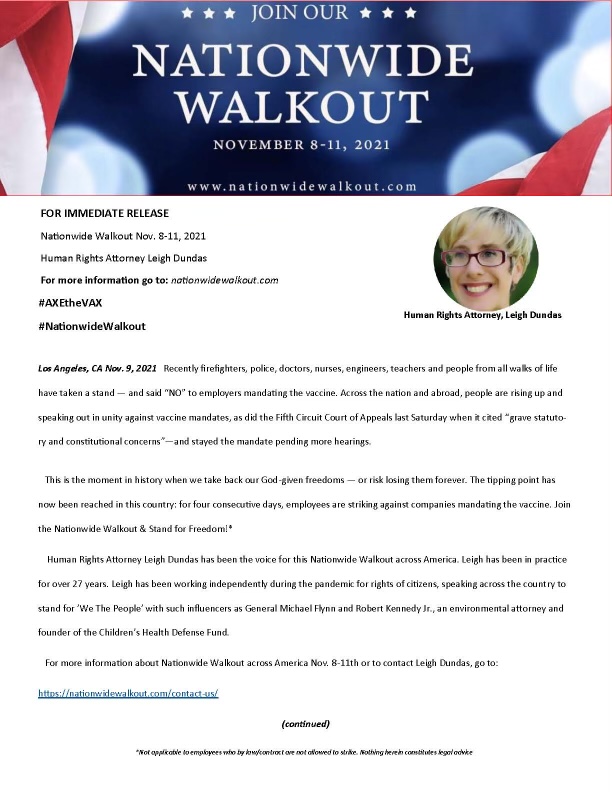 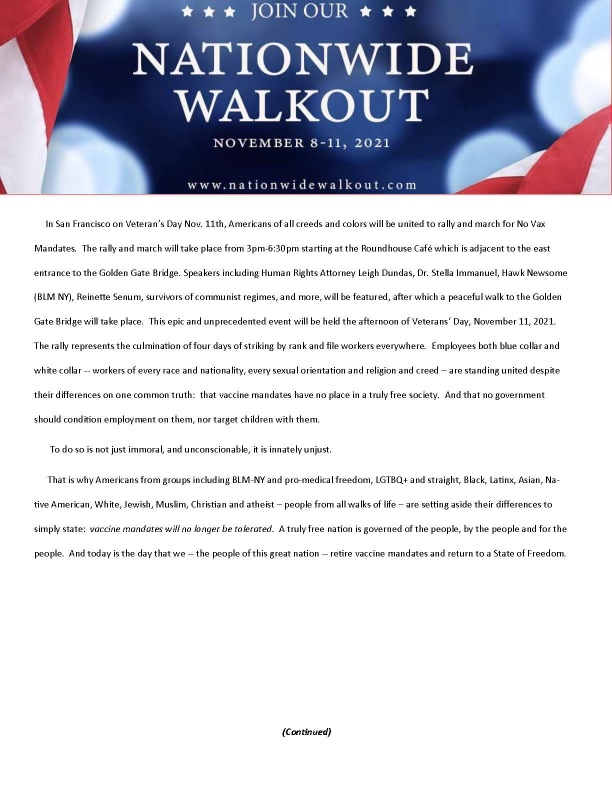 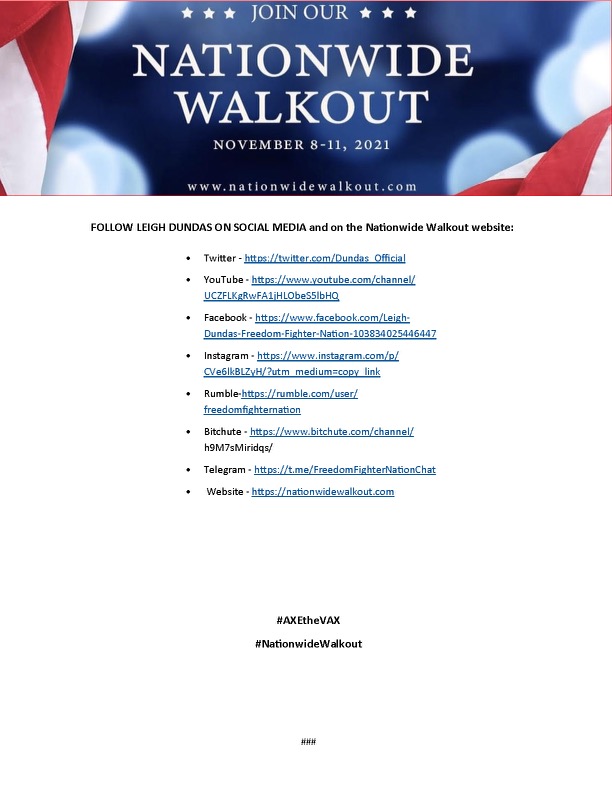 Stay tuned and stay connected in this unprecedented age of censorship. When you sign up for my mailing list, expect to get current real time news on as-needed basis - as well as other tips for navigating these tumultuous times. Check out Advocates for Citizens' Rights, a 501(c)(3) dedicated to advancing freedom and civil liberties worldwide to learn more about Leigh's efforts and support her work at www.Citizens-Rights.org. These are urgent times and your financial support is greatly appreciated to fuel the flames for freedom!