Sunday Reads is back!

These are scary times. I hope you and your families are keeping safe.

It's been quite a while since I last sent out this newsletter (the last Sunday Reads I sent out was March 2017). Many readers asked me when I was going to restart, and I always said, "soon". I happen to be a better procrastinator than a doer, so there you go.

But sometime during the last few weeks of quarantine, I ran out of excuses.

So a quick recap: Every Sunday, I'll send you the most thought-provoking articles I've read in the week, on business, strategy, entrepreneurship, and everything in between. Think of it as a little brain exercise - to help us all boost our cognitive toolkits for business, and become better at what we do.

The deal is this: Dive as deep as you want. Read my thoughts first. If you find them intriguing, read the main article. If you want to learn more, check out the related articles and books.

[Before we jump in: in case you don't want to receive this newsletter anymore, you can unsubscribe at the bottom.]

Digital advertising is one of the biggest new industries of the Internet era. In 2018, USD 273Bn was spent on digital ads globally.

What if I told you it was all fake?

Or more accurately, what if this article told you it was all fake?

The article has several examples of real-life experiments - e.g., when eBay stopped all its ads on Google for 3 months, the drop in online sales was 0%. Yes, you read that right - zero, nada.

But how? Aren't people clicking on those ads? How can the impact of removal be zero?

In fact, some skeptics believe that ads don't work at all. That no one is convinced to change behavior based on ads. Could it be true?

Well, do you remember the last time you clicked on an ad while not looking for that exact item? Me neither. (except for that banner selling N95 masks last week, but it was sadly out of stock).

But surely, you say - if digital ads didn't work, why are marketers still spending hundreds of millions on them?

As the article says, quoting Steve Tadelis, "marketers actually believe that their marketing works, even if it doesn’t." Good old Cognitive dissonance.

Yes, cognitive dissonance does play a role. But I think there's a second element too. You know the saying, "what gets measured gets managed". Google and Facebook report clicks and impressions, not actual incremental purchases. That's what is available, so that's what marketers track and optimize. They don't track incremental purchases, because there's no way to monitor that.

In other words, what doesn't get measured, doesn't exist. 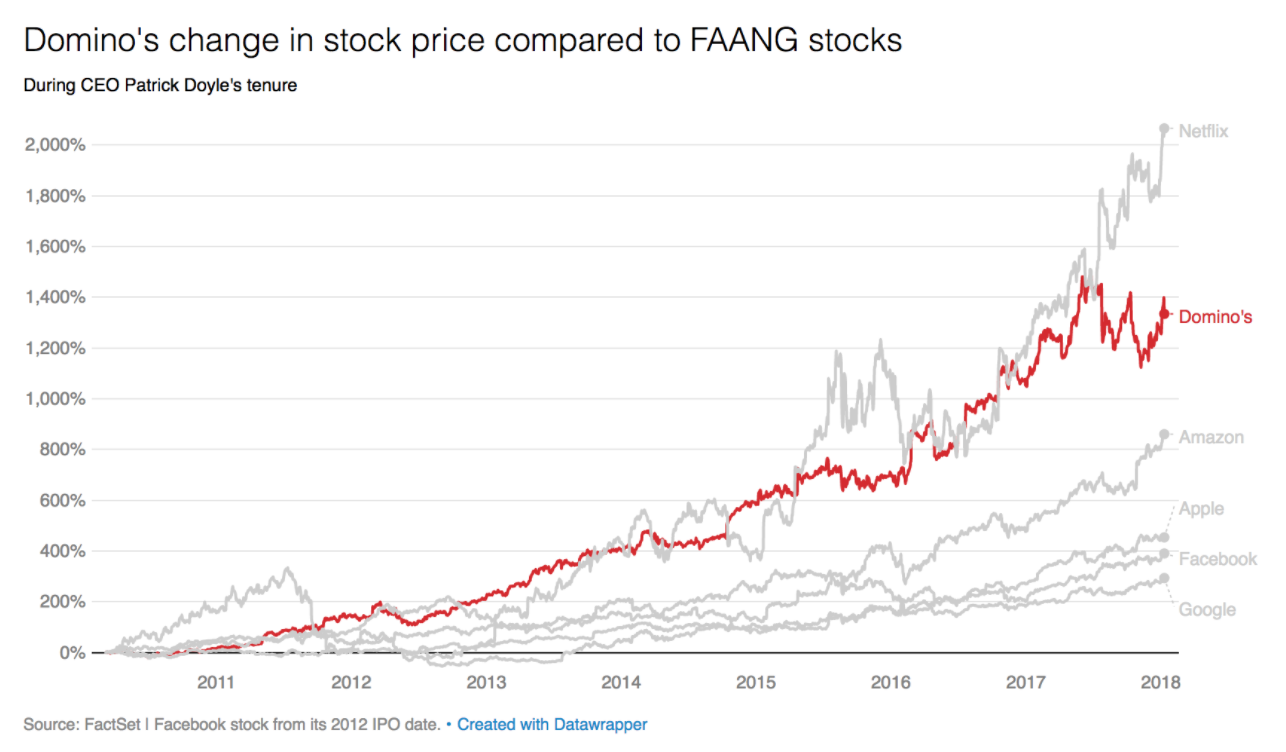 How did they do it?

By going back to the basics. Domino's was not about "30 min or free". Domino's was, first and foremost, pizza.

But, as the article says, their pizza was dreadful.

People actually liked pizza less if they knew it was Domino’s than if they thought it was a random unbranded pizza.

The most impressive part about Domino’s growth from 1960 to the early 2000s is that they became one of the biggest pizza delivery chains in the world with some of the worst pizza in the world.

The hardest part of the transformation was accepting the negative feedback without cognitive dissonance (unlike the marketers above). And re-engineering their pizza from the ground up.

A second element to the transformation was becoming ubiquitous. Everyone knows when Domino's first experimented with "Tweet to order". Today, you can order via Google Home, Alexa, Slack, Facebook Messenger. Even via your Smart TV, as you binge through your favorite show.

The article has a lot of detail on Domino's transformation. Fascinating to see what a company can do by embracing its faults.

Fred Wilson founded Union Square Ventures, one of the most successful venture funds ever (their 2004 vintage fund gave a 14x return!).

In this article, he contrasts sport with startups and business.

In sport, you have to execute the perfect move to win. You have to do something complex and intricate. Do a triple flip and a pirouette as you dive into the water to get the gold. Hit a 5,000 rpm topspin serve into the far corner to get past Federer.

But in business, as Fred says, you've got to keep things simple.

Unlike sports like diving or skating, you don’t have just one or two or three attempts to win. In startups, you get to show your stuff every day, all the time.

So the better approach is to pick something simple to execute, nail it, then build on it with another relatively simple move, nail that too, and keep going.

Another apt metaphor for this is amateur tennis. Unlike professional tennis, keeping things simple is enough. David Foster Wallace talks about this in his memorable essay (#longread), Derivative sport in Tornado Alley.

He won school tennis championships simply by keeping the ball in play. Return every shot right in the middle of the court. Boring, yes. But that was a feature, not a bug. Sooner or later, the opponent would get exasperated and try to curl one into the far corner. And hit it wide.

I'd be remiss to not include anything regarding the COVID epidemic. I'm sure you're already up to your ears in coronavirus links. But in case you want more, here are two roundups by Scott Alexander.

5. And some fun stuff

Over the weekend, I came across this hilarious John Oliver segment on Boris Johnson.

It's hilarious, as Last Week Tonight often is. But two things stood out to me:

Boris Johnson has played an incredibly long game. Even 20 years ago, as a reporter in Brussels, he was building a mountain of falsehoods about the European Union. When Brexit came along, he'd been practising for it all his life.

Wow! This comment blew my mind with its simple ingenuity.

See you next week. In the meantime, stay safe (and indoors).