Hope you and yours are keeping safe. Countries are opening up, but the virus is still around 😟.

I'm back again with the most thought-provoking articles I've read in the week. (in case you missed my article last week, you can find it here: Hiring great people).

This week, we first take a look at 50 powerful ideas, from David Perell. I found many of the concepts quite insightful, changing the way I look at the world at least a little.

Next, we look at a real-life illustration of one of these ideas. What gets measured gets managed, COVID edition.

And then, we end on a positive note. We talk about courage, one of the most powerful and underestimated emotions.

Last week, I came across this great article by David Perell, 50 Ideas That Changed My Life.

It's a good summary of a few powerful concepts that explain a lot of human behavior.

Listing four ideas that resonated with me. The full article is a great Sunday Read.

The map is not the territory.

I've written about this before on the blog.

It's always helpful to remember that your conceptual model of reality or of people's behavior is just that - a model. A model or map often leaves out important things.

Most of the time, everything around you makes sense. But once in a while, it doesn't. Notice your confusion when that happens. it's an opportunity to improve your map.

Very often, how you frame a particular concept can completely alter how people react to it. For example, the same person can support an estate tax but oppose a death tax — even though they are the same thing.

I wrote about something similar in COVID-19 and Taboo Tradeoffs.

This is now one of my principles for life: Hold yourself to a higher standard than you hold others to.

When a measure becomes a target, it ceases to be a good measure.

Example from Perell's article: One hospital took too long to admit patients, so they were penalized for 4+ hour wait times. In response, they asked ambulance drivers to slow down so they could shorten wait times.

I've written about a different facet of this too, in What doesn't get measured... doesn't exist?.

Check out the article in its entirety. Quite insightful. I think all of us should take the time to do this once - what are the 50 (or 10 or 75) beliefs that animate how I operate in the world?

2. What gets measured gets managed - COVID edition.

Speaking of Goodhart's Law, let's look at what's happening in the world of COVID-19.

The virus refuses to go away (Jun 20 had the highest new case numbers since May 1 😰). Governments face incredible pressure to declare good news. Ergo, the incentive to mis-report is tremendous.

I've written before, in Black Swans, Honesty, and Dishonest Statistics, about why case counts alone are meaningless.

If a country only has limited testing capacity, it will be reserved for the most sick - the 10% of afflicted who show up at the hospital. While leaders are busy congratulating themselves on flattening the curve.

A country where the case count is increasing because it’s doing more testing, might actually be getting its epidemic under control.

And of course, if a country ramps down its testing (either because run out of capacity or for, ahem, PR reasons), then the situation could be getting actively worse as the case counts reduce and the citizens celebrate.

Let's pretend for a second. You're a government facing enormous pressure to show victory after a costly lockdown. Choose the easier option:

Yes, the more difficult option 1 is to execute, the more attractive option 2 looks.

This is already happening in India, according to Why we could all be sitting on a covid powder keg with its fuse lit. Some quotes (but read the article itself. It's scathing. And scary):

States seem to be scaling back on corona tests so that they can pretend the epidemic is under control. What’s going on is that states are in competition to flatten the number-of-cases curve.

... state governments do not want people to be tested. Doctors and labs have been sent the message. After all, if you don’t test, you can’t have any cases, can you?

Delhi conducted 12% less tests in the week of 2-8 June than in that of 26 May-1 June. This, while the number of confirmed cases rose 34%, and deaths rose 67%. About one in three people being tested currently is turning out to be corona-positive.

Well, we get the behavior we reward. We flatten the curve we track, not the one we need to flatten.

On the other side of the ocean, Trump purports that testing is a problem! For exactly the same reason. 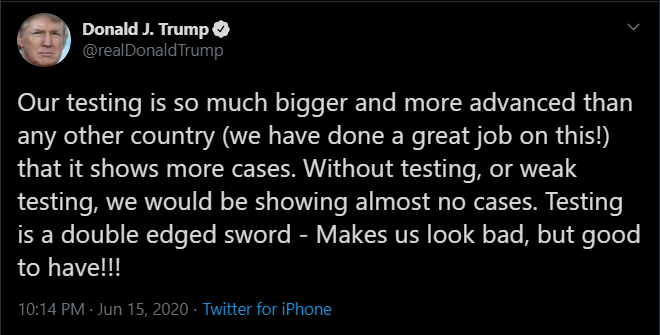 As he proclaimed in his election rally yesterday, “Slow the testing down, please.”

Focus on getting the measure down. The actual issue doesn't matter as much, does it?

Our World in Data has put together a good chart showing which countries are actually getting the virus under control. 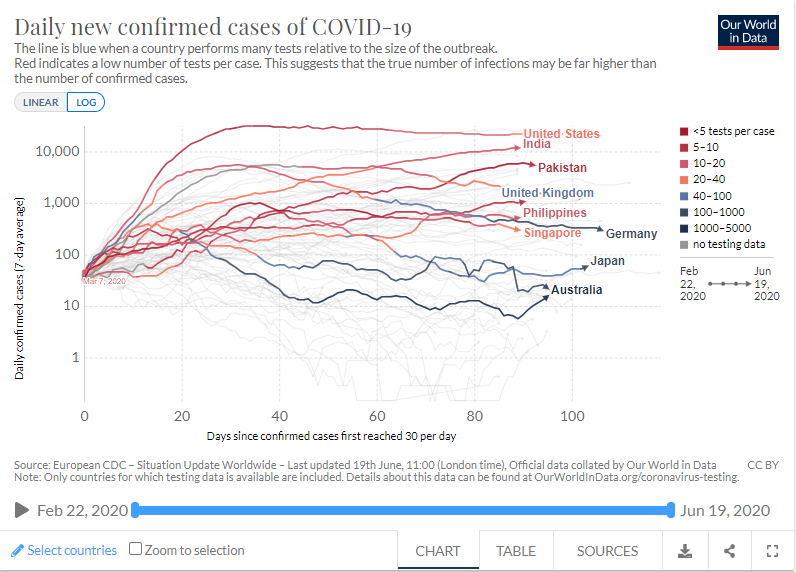 How to read this chart:

You can go to this link to add other countries to this chart. It gives the truest picture yet.

The CEO of my company likes to show a slide every now and again, reminding everyone of the different meanings of the word "courage".

It's one of the most positive emotions.

Whenever you're feeling down or exhausted, take a look at this image. At least one of the meanings of courage may be exactly what you need. 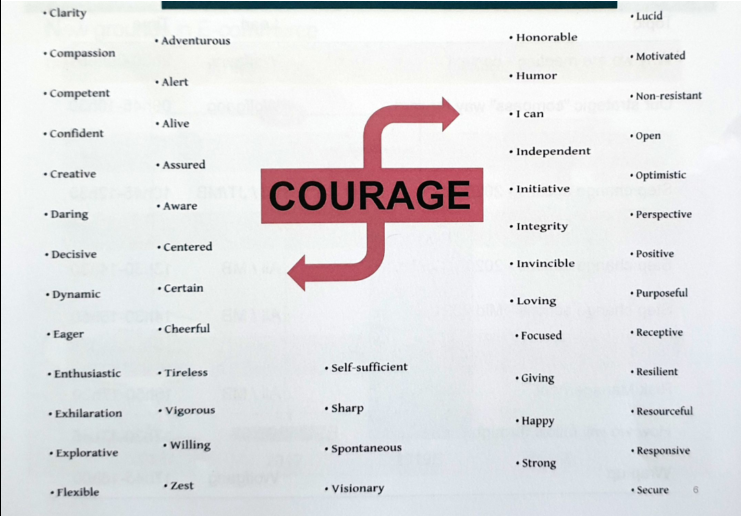