Hope you and yours are keeping safe. Countries are opening up, but the virus is still around 😟.

I'm back again with the most thought-provoking articles I've read in the week. (in case you missed my article last week, you can find it here: How to manage your team LIKE A BOSS (even while working remote)).

This week, we first take a look at Amazon. It may be one of the world's most valuable companies today, but it's a simple algorithm (not easy), executed over and over.

Speaking of algorithms, next we talk about an algorithm to overcome procrastination.

And third, what we've learned about risks and sacrifices, from the last few months on COVID-19.

If there were ever a biopic about Amazon.com, it would run like Zack Kanter's What is Amazon?

The key insight from the article is that some of today's biggest companies are basically an algorithm, executed over and over.

Walmart can be thought of as a bounded search for the optimal selection, inventory, and pricing of SKUs that a local market could support.

But all of these innovations were really just developed in order to optimize what was a very simple formula: that is, the selection, pricing, and inventory of SKUs in, say, a 30,000-200,000 square foot store.

Jeff Bezos had an epiphany in 1994: shelf space was no longer the most important constraint. The Internet had made shelf space infinite. You didn't have to choose the right SKUs, you could list them all!

Bezos set out to build an unbounded Walmart.

What is Amazon's algorithm?

1. Encounter a bottleneck to growth.

2. Determine what internal resource is the bottleneck.

That's how Amazon became a marketplace.

Quoting from the article:

Amazon correctly hypothesized that because vendor selection was not important in the world of infinite shelf space, Amazon itself – or, more accurately, its vendor onboarding process – would be the bottleneck to growth

In its effort to remove this bottleneck, Amazon had an insight that would dramatically accelerate its strategy of mass SKU-aggregation: what if, instead of the painfully slow process of onboarding and negotiating with vendors, Amazon could instead open its website to third party sellers?

After removing the vendor bottleneck, Amazon discovered the next constraint to infinite shelf space: Computing power and data storage.

So it built computing power that scales with demand.

But there's a secret ingredient too.

In 2002, Jeff Bezos had the most important insight he would ever have: in the world of infinite shelf space – and platforms to fill them – the limiting reagent for Amazon’s growth would not be its website traffic, or its ability to fulfill orders, or the number of SKUs available to sell; it would be its own bureaucracy.

And so, as told by former Amazon engineer Steve Yegge, Jeff Bezos issued an edict: 1) All teams will henceforth expose their data and functionality through interfaces, 2) teams must communicate with each other through these interfaces, 3) all interfaces, without exception, must be designed from the ground up to be exposed to developers in the outside world, and 4) anyone who doesn’t do this will be fired.

Anything Amazon builds for itself must be quality-tested by the real world outside Amazon.

You can read more about this in Steve Yegge's rant.

Amazon's algorithm is useful as a general rule too.

Very often we say, OK, these are my three biggest problems, #3 seems easiest to solve. So let me solve that. And then we wonder why there's no impact.

But when you solve problem #1 first, a little magic happens.

2. How to beat procrastination. Today.

I came across this hilarious article this week, Structured Procrastination.

As the author says, a little tongue-in-cheek:

Anyone can do any amount of work, provided it isn't the work he is supposed to be doing at that moment.

I have been intending to write this essay for months. Why am I finally doing it? Because I finally found some uncommitted time? Wrong. I have papers to grade, textbook orders to fill out, an NSF proposal to referee, dissertation drafts to read. I am working on this essay as a way of not doing all of those things.

Take for example the item right at the top of my list right now. This is finishing an essay for a volume in the philosophy of language. It was supposed to be done eleven months ago. I have accomplished an enormous number of important things as a way of not working on it.

And here's the whole theory in a chart. You can see and download the full-size version here. 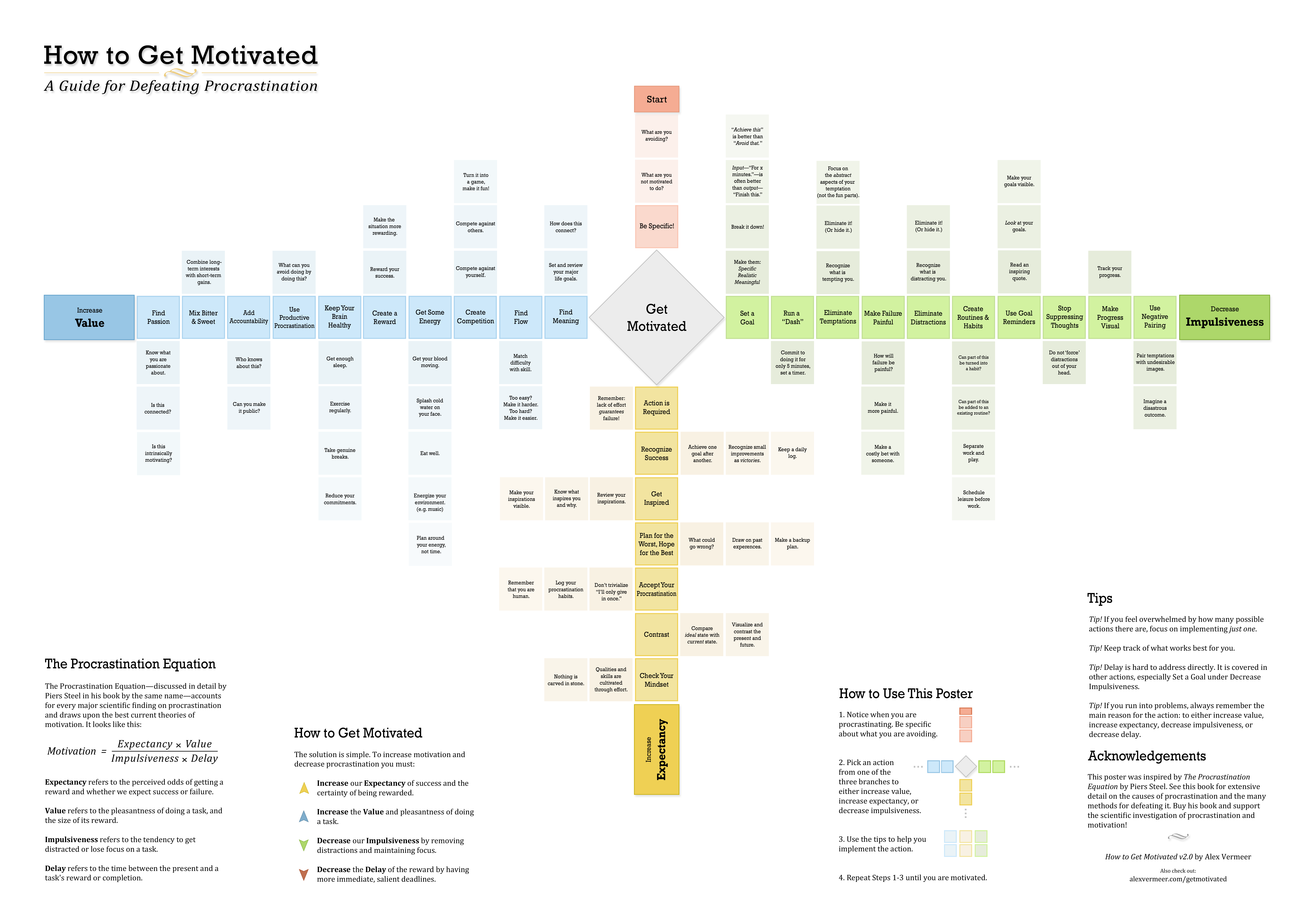 Covid-19: My Current Model by Zvi Mowshowitz is a good summary of our current understanding of COVID.

The whole article is a great read. But three points that I want to call out.

The few times you end up talking directly with someone in the course of business, the one social gathering you attend, the one overly crowded store you had to walk through, will dominate your risk profile.

Be paranoid about that, and think how to make it less risky, or ideally avoid it. Don’t sweat the small stuff.

Sacrifices To The Gods Are Demanded Everywhere.

A sacrifice to the Gods is an action with physical costs, taken in the hope that it will make one less blameworthy when it fails.

"Once we act appropriately, we are virtuous and will doubtless be saved. We can stop. There is no need to proceed in a way that would actually work, once the Gods have been placated. Everything will work out."

When governments resort to such sacrifices to the gods (including ringing bells so we're clear what we're doing), without heed to the ground realities of their particular nation, we get this: 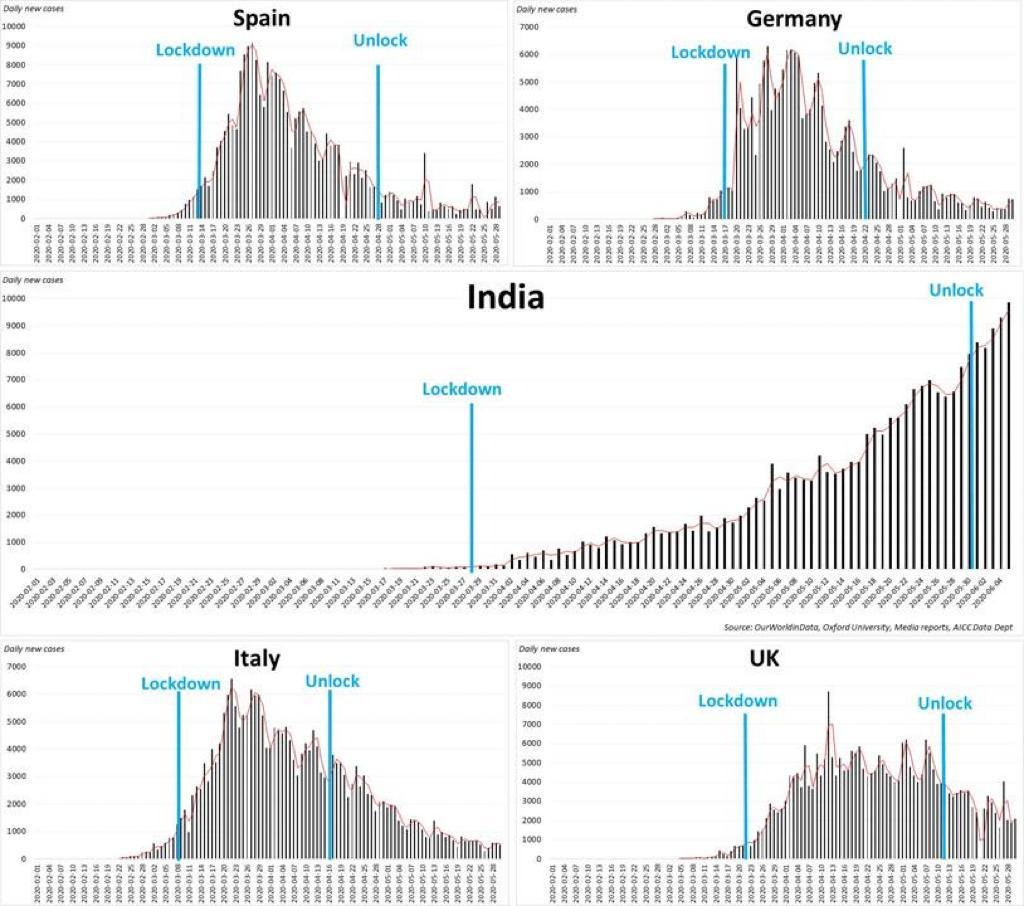 See the India graph. This is what a failed lockdown looks like.

But didn't India do all the right things that the developed nations did? Complete lockdown like Germany, check. Shut all public transport overnight like China, check. Clanged plates like Italy, check. Lit lamps like..., well, that might have been an original idea.

All India had left was a prayer that childhood Tuberculosis vaccinations would protect the citizens. Not to be 😞.

Masks are effective, even cloth ones.

Google Search trends in the times of COVID (courtesy xkcd). 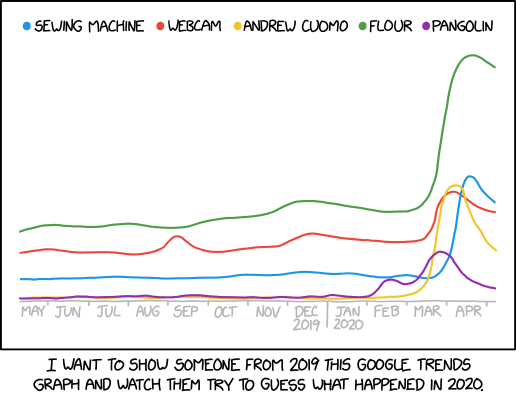 That's it for this week! Hope you liked the articles. Drop me a line (just hit reply or click on the "Leave a comment" button) and let me know what you think.