Hope you and yours are keeping safe.

I'm back again with the most thought-provoking articles I've read in the week. (in case you missed my newsletter last week, you can find it here: Sunday Reads #97: They will never take our FREEDOM!)

This week, we first take a look at the laws of investing. The core principles that govern how we behave in markets.

Next, a look at the narrative fallacy in investing. Every stock has a story.

And last, a repost from an older newsletter: The world has tipped into the mother of all recessions, and yet the stock markets are rising like nothing's happened. What the hell is going on?

[PS. I will be changing the newsletter to a new system (Substack) next week, as I'm having some deliverability issues with the current one. So do watch out for the email next week - it might not show up in your inbox properly the first time.]

1. The Laws of Investing

I love learning about new things. That's why, so many years into my career, it's hard to pinpoint one domain that is my expertise. ("jack of all trades..." comes to mind, but then I tell myself I'm a fox, not a hedgehog. It's all about the framing 😉).

Whenever you enter a new field, it seems like you have to memorize / learn a zillion different things.

But that isn't true.

There are a few core principles that govern every field. The million things you thought you had to learn? They are just special cases of the core principles.

In the same vein, Morgan Housel shares The Laws of Investing.

I'm sharing some of the laws that resonated with me (but do check out the article itself).

If markets never crashed they wouldn’t be risky. If they weren’t risky they would get expensive. And when they’re expensive they crash.

Reminds me of Bill Janeway talking about "the banality of bubbles" in Doing Capitalism in the Innovation Economy.

Bubbles are a feature, not a bug.

This is a good reality check. We keep talking about compounding as the 8th wonder of the world. But why is everyone not rich?

Investing is the equivalent of the NFL only being allowed to recruit players in their 50s – well past their prime, with performance far short of what their younger selves could achieve.

Some people’s earnings power will peak when they’re young. But when the world is that good to you when you’re young you’re bound to assume your paychecks will continue indefinitely and fail to take advantage of your blessed time horizon.

The gap between what's possible on a spreadsheet and practical in the real world will always be vast.

Law #7: Narratives become self-fulfilling and can override visible capabilities that are easier to measure.

Law #11: The most persuasive evidence is what you want to be true and/or have experienced personally.

Both these laws are important, and we forget them so often! Narratives are visceral, so we take them as true. But in reality, they're just anecdotes.

As they say, "A single death is a tragedy; a million deaths is a statistic".

2. Every stock is a story. Or, the Narrative Fallacy in Investing.

There's this famous video of Kurt Vonnegut, where he says that all stories have shapes. Check out the video if you haven't. I'll wait.

Based on this idea, a team of researchers studied 1,327 famous books to identify their shapes. They found six consistent patterns: 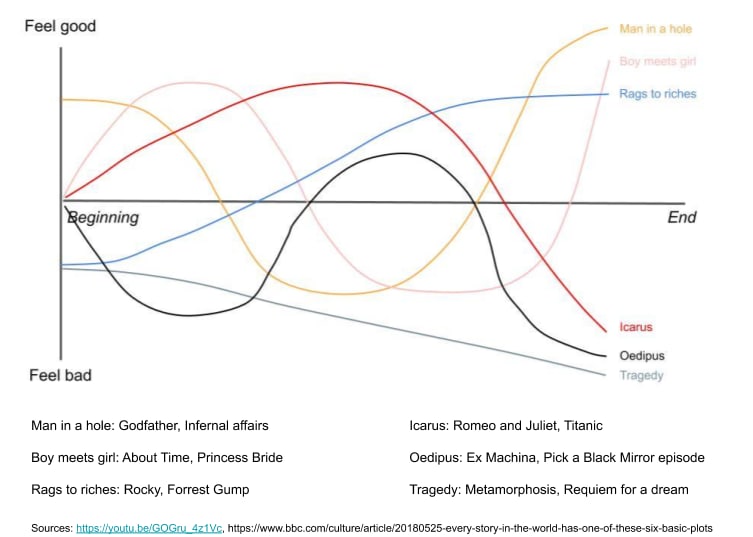 The consistent reappearance of these shapes in our stories has an important implication for our simple pattern-matching minds:

We see patterns where none exist. And the patterns we see are predictable.

As Leon Lin says in A story is a lie and a story is true, stock-picking is not immune to this.

Stocks have shapes too.

He gives an example of a dating app company with a strong monopoly. It has a fast growing subscriber base, and is making huge profits. It is every stock market investor's darling.

And then Facebook announces that they're entering the category.

Immediately, there's a 22% decline in the stock price in a day.

The company's fundamentals didn't change. But the story that investors were telling each other did.

And in sync with the "boy meets girl" shape in the image above, the stock recovered to new highs over the next year. (it is a dating app after all!).

Investors tell each other stories, and bet on what they hope to be true.

Lessons for investors and operators:

Some more great (short) reads on the Narrative Fallacy:

3. Repost: What the hell is going on with the stock markets?

In Sunday Reads #92, I wrote about the strange behavior of the stock markets. They are on a strong upswing despite only bad news.

It's been 1.5 months since, and they're still going up. In fact, the NASDAQ has breached new highs!

The three hypotheses I shared then still ring true, so I'm sharing them again.

Hypothesis #1: What kills you makes me stronger.

It's possible that large companies are unusually well-equipped to survive, and are also better able to benefit from government interventions. Meanwhile, small companies, individuals, and the general economy just don’t have the cash reserves or flexibility to react.

As more and more assets are available for investment in equities, the real economy almost doesn't matter. Advisors of every stripe are too busy buying ETFs for their clients.

As the risk-free rate nears zero, even a slight increase in yield feels like an immense reward for taking risk.

Which is why, even as expected returns from the stock market go down, money flows in unabated.

Read on, in What the hell is going on with the stock markets? 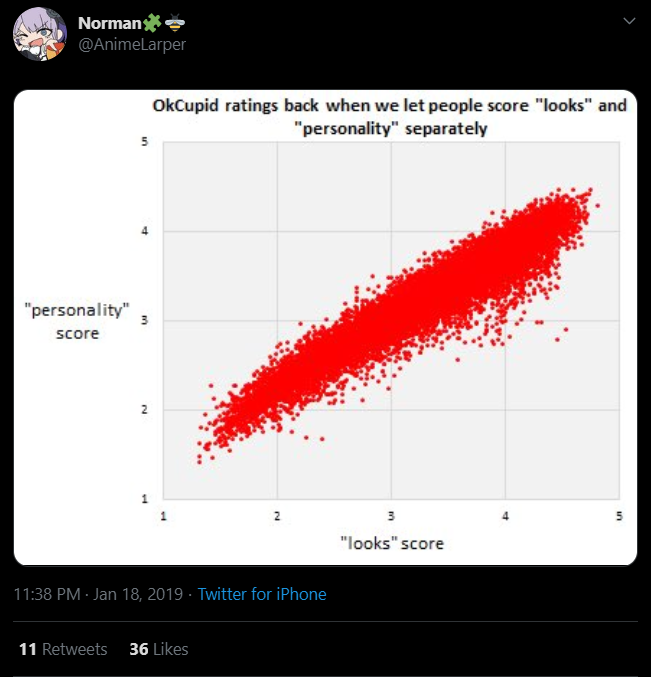 Funny how there's such perfect correlation between good looks and personality. The halo effect is in glowing health!