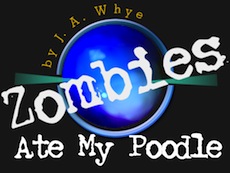 Zak is a not quite typical 12-year old kid who performs with his Dad as a street performer.

One night he wakes up to find his parents missing and the empty skull of Jeffrey, the family poodle, on the kitchen table. Zombies have eaten his poodle’s brains and taken his parents for a snack later!

Now Zak must gather his weapons (juggling knives, torches, and a bullwhip) and set off on his unicycle to find the zombies before the brains of his parents are eaten.

While battling the zombie army Zak discovers a horrible secret and now it’s too late!

Not while Zak still has a breath in his body and a brain in his skull, it’s not!

Sign up here to find out when Zombies Ate My Poodle is available and get the first part free before the book is released!