The last chapter has splashed across the page

By the time you read this, I hope to have finished writing Truth in Flames, Book 5 of the Tomahawks and Dragon Fire Series. (Oct 25) I'm on the last chapter with over 90K words in the book so far. I'm thinking about adding an appendix with a list of all the characters in the story to this point, and to acknowledge some of the historical sources I've used in the creation of this Historical Fantasy series. I don't think Historical Fantasy carries the same punch as Flintlock Fantasy, but it is also an accurate description. -- Update Oct 28 -- I finished the book last night at 95K words and change. I say "finished" meaning that I wrote the last chapter. However, I do need to go back and add a scene I forgot to include in an earlier chapter and I may add a brief epilogue.

In this installment, Atu and Iago return from their fantastic adventure in Book 4. Lucette discovers a conspiracy among Washington's troops in New York as the British prepare to expand their invasion force. Antonio and Rip join the fleet of Commodore Hopkins and Lt. John Paul Jones for a raid in the Caribbean, where Antonio renews his acquaintance with the beautiful Catalina. Meanwhile, the dragon hunters may be sick to death of battling stone cats and other beasts, but they can't get where their iron master must take them without some unpleasant encounters. Finally, Alex struggles to mitigate the consequences of his previous decisions--and must confront Captain Roberts, his dragon, and a host of foreign troops before the army in the north is utterly destroyed. Liberty and independence hang in the balance.

As you can see, I haven't yet tried to fashion this into an attention-grabbing book description. Let me know if you have any suggestions.

On the outside chance that someone might find this interesting, I've started using a free program I've had for many years--it's called Free Mind. I'm using it for outlining (and changing the outline to fit what I've written). It also allows me to quickly see where some incident in the story takes place so I can go there and refresh my memory of it, correct it, or do some other secret writer stuff. Here's a little screen capture of some of the mind map as it's call for Truth in Flames. The boxes are called nodes and can be moved around attached to others. The small circles, like the one at the end of the blue highlighted box, indicate that there are expansion nodes for that one which are currently closed. Clicking on the node opens the expansions or subordinate nodes, like the next level down in an outline. 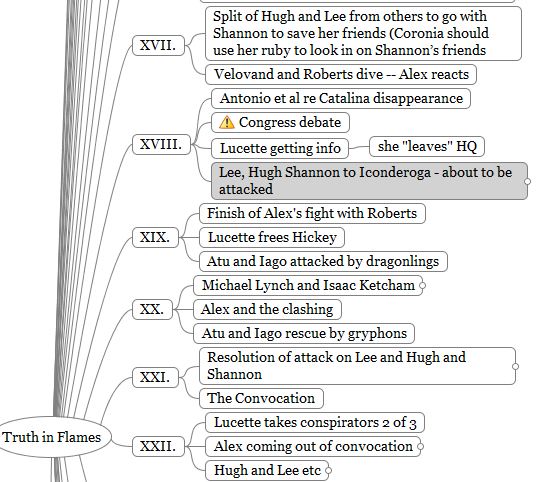 In my blog of the 30th, I included the mind map I used when I was brainstorming the characters for the series. Almost none of them came through as originally envisioned.

Let's address the Power Quote today. Hume insists that quotes are good things but you should not refer to any author with whom you are not familiar or are uncomfortable quoting. The author should be recognizable. The quotes used should support your point and be brief--of course there are exceptions to the rules.

If you're using statistics, remember the three Rs: 1. Reduce the number of statistics you use. 2. Round them off. 3. Relate a statistic to a story.

I'm speaking Oct 30th. I don't plan to use any statistics, but I hope to use the other techniques Hume recommends. --Update Oct 31 - my talk yesterday went better than I expected. I remember using the Power Pause and a few other appropriate pauses, as well as the Power Opening. Not sure how powerful the Power Point and Power Brief were, but the talk got a lot compliments and some tears.

Here's the Fantasy Giveaway if your looking for some ebooks. Get them while they're hot.

And this Brave New Worlds giveaway includes, in addition to over 45 great books, a $20 gift card for someone.

You might want to check this out if girls with swords, dragons, and magic sound good to you: 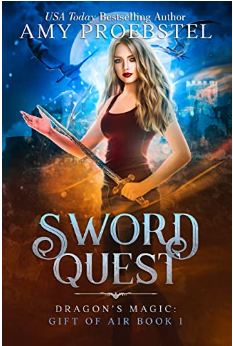 "Sword Quest is the thrilling first book in the Dragon’s Magic: Gift of Air epic dragon fantasy series. If you like tales of courage, gripping self-discovery, and eye-opening twists, then you’ll love Amy Proebstel’s intriguing adventure."

I'll sign off with one my anagram aliases from last time that a reader liked: