🍏 What Apple vs. Epic Means for Crypto | Crypto GameBites Issue 3

At the time of this writing, crypto is taking a hit (ETH is below $3k and BTC is flirting with $39k).

I remain bullish on crypto as whole (bc DUH) and crypto gaming in particular because the play-to-earn model & true ownership of digital assets (NFTs) actually change the entire paradigm of the gaming experience.

That’s how fundamentally transformative blockchain is to gaming.

10 years from now, kids will find it mind-blowing that we played games that didn’t allow us to own our digital assets or generate income.

Any future game that doesn’t offer these features to players will be seen as an ancient artifact.

Much like this bad boy I discovered while cleaning up my house last week: 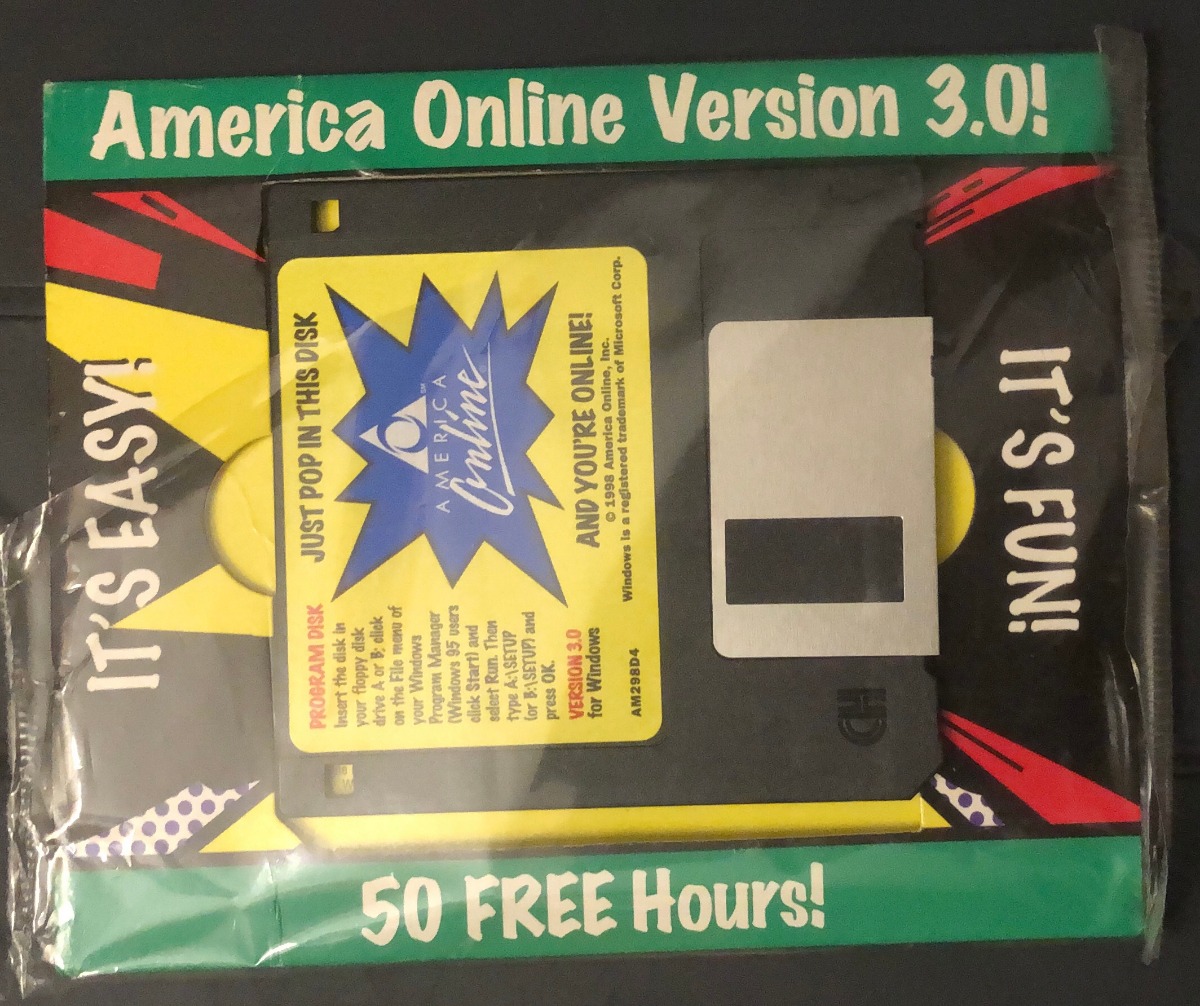 (For the kids in the audience, no, I did not 3-D print the save icon. This was how us old timers used to load up the interwebs on our PCs back in the day.)

Now, while I have high hopes for the future of crypto gaming and I’m not bothered by the current market turbulence…

I am concerned about a few things that are holding blockchain games back.

Which I’ll cover in NEXT week’s issue.

Because this week, we have some big stories to cover.

🙃 How crypto turns game development upside down (in a good way)

ICYMI: A deep dive into the state of the blockchain gaming industry by top gaming academic, Joost Van Dreunen

I first heard about the Epic vs. Apple case from my sister, who told me that my nephew was freaking out that he wouldn’t be able to keep playing Fortnite on his iPad.

I dgaf because I don’t play Fortnite (my vice of choice is Call of Duty: Mobile).

But the case popped back up on my radar when I heard about the ruling.

On the one hand, the judge ordered Epic to pay Apple revenue commissions as back payment.

But on the other, she also ruled that Apple CAN’T “keep developers from directing customers to alternative payment methods outside its App Store, citing California competition laws.”

Here’s the actual ruling, which I got from Fred Wilson’s blog post about the case:

Read that again, because it’s huge for mobile gaming and for crypto specifically.

If more non-blockchain games start introducing crypto payment options, we could see another vector for crypto adoption in the mainstream.

This is a MASSIVE win for crypto.

“Without a villain, there’s no hero.”

What’s an adventure game without bosses to fight?

Up until now, the Polygon-based dungeon crawler, Crypto Raiders, hasn’t had any enemies for players to fight in their dungeons.

This means players can’t die in the game yet, which is great for a new player like me because the game features permadeath...and I’m just not ready for that.

But this is all about to change with Crypto Raiders’ upcoming launch of dungeon bosses, called “MOBS”.

There are 7 MOB rarities, 13 MOB types with multiple subtypes, and 33 possible Special Moves.

Here’s a MOB called the Archangel of Decay, which is a “Legendary Boss”: 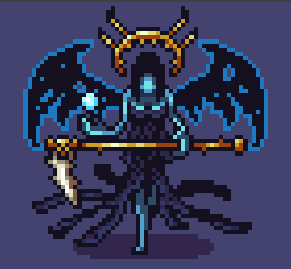 Raiders will encounter these MOBS in combat dungeons and fight them for a chance to win cool sh*t (which is TBD at the time of this writing).

But wait a second...video game bosses aren’t anything new, so what makes this story worthy of being published in such an esteemed publication as Crypto GameBites?

The game devs are giving ownership of these MOB characters to players!

(Remember, because these characters are NFTs, players retain actual ownership of these assets).

This changes the entire gaming dynamic in a couple of ways.

First, MOBS raise the stakes in the game because they can kill Raider characters.

Since the game features permadeath, players whose characters die will need to spend real-world coin to buy a new character and play again.

Depending on the floor at that time, it could get expensive to buy back in.

Second, players that own MOB dungeon bosses can stake their MOB NFTs to fight other players.

If a MOB defeats a Raider, the MOB owner gets a portion of the Raider’s items + $AURUM reward (the in-game currency).

And here’s the kicker: MOB characters DO NOT experience permadeath!

The official blog post doesn’t address this, so I searched the CR Discord for the answer: 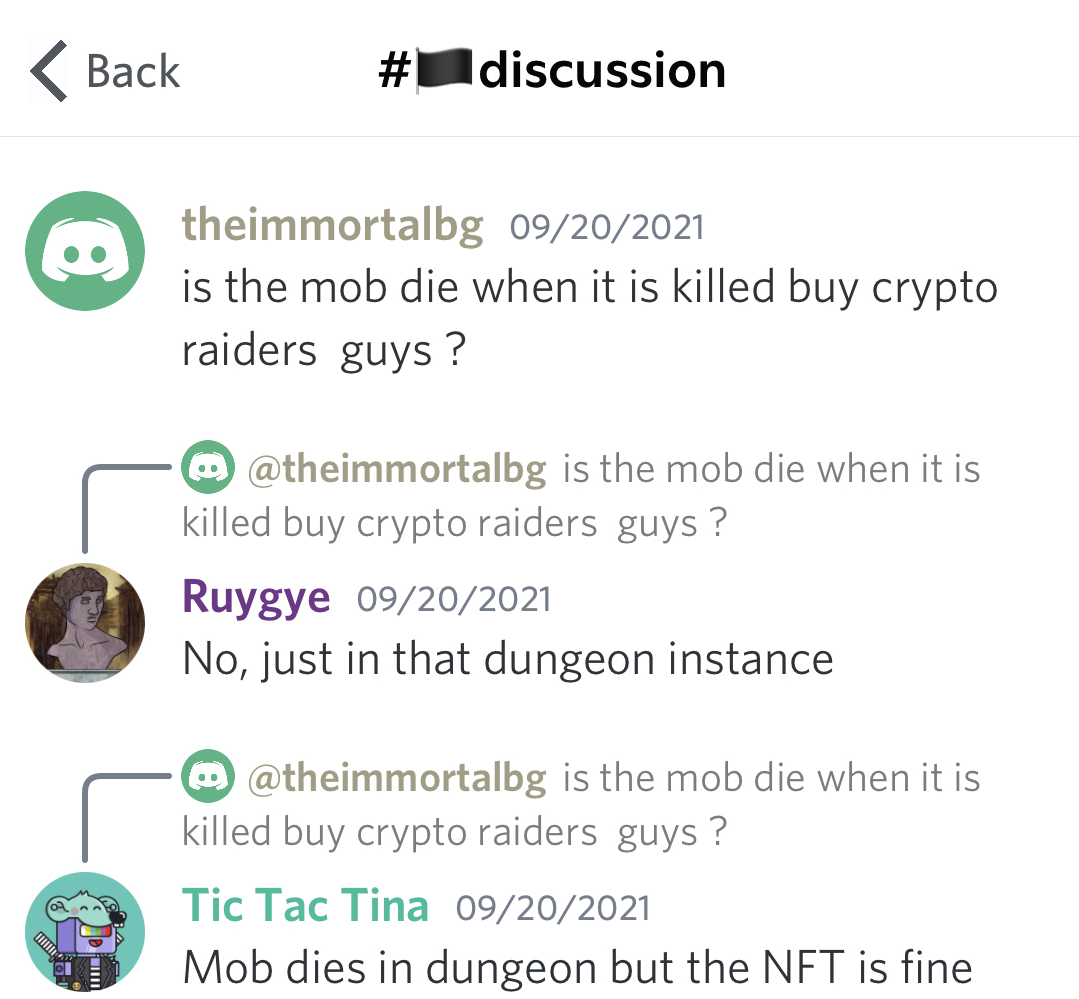 According to the official Crypto Raiders blog:

“This innovative new mechanic allows a myriad of possibilities. People can decide to go all-in on MOBS, instead of Crypto Raiders, and try to earn in the game by defeating Crypto Raiders. Others may decide to sell their rare MOBS and use that to buy more Crypto Raiders or items in the upcoming Auction House.”

How are MOBS being rolled out?

Once the claim smart contract rolls out (no official date announced, but the devs said “1-2 weeks” from release of the MOB keys), MOB key holders can redeem a random MOB.

As a Crypto Raiders player, I love love love this new feature.

(I’m also scared to death for my Raiders.)

It’ll be interesting to see how people play once the game activates MOBS and combat dungeons.

Will they choose the Dark Side and go all in on MOBS to earn items and $AURUM without fear of permadeath?

Or will they choose the more thrilling and heroic path of a Raider, risking life and limb to seek glory, Loot, and power-ups?

Only time will tell.

And when it does, I’ll pass the story along to you, dear reader, right here in this newsletter.

In a masterful Twitter thread, a16z partner and video game veteran Jon Lai shared his thoughts on why the crypto play-to-earn gaming model has been successful despite the many failures of traditional games to adopt real-world money trading.

He dives into why real money trading DID NOT work in such games as Diablo 3, Artifact, and Star Wars Battlefront II...why it DID work in games like Counterstrike, World of Warcraft, Eve Online, Genshin Impact...and why it succeeds in play-to-earn crypto games. 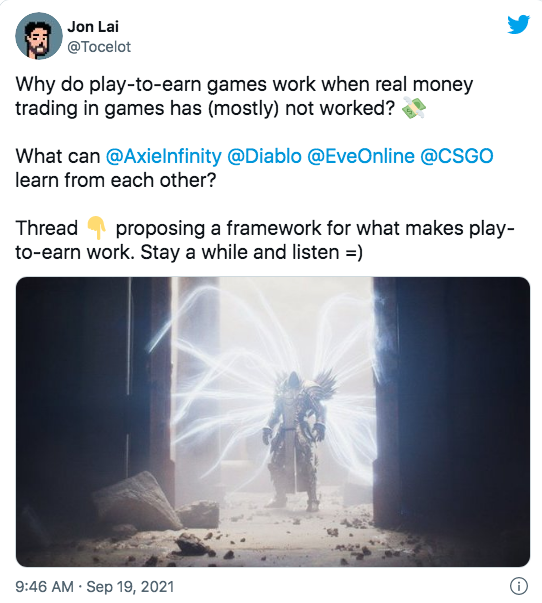 As the Metacast crew discussed in their podcast episode about Loot, there’s something really intriguing about bottom-up game development.

Instead of starting with the game, NFTs allow projects to begin with items (such as Loot), which then plant the seed in people’s minds for potential games.

These projects lead to games that optimize for fun because they’re truly community-driven.

It turns the job of a game developer upside down by putting the items/characters first and the actual game last.

VC Nabeel Hyatt does a way better job of breaking this down in his Twitter thread.

Give it a read by tapping here.

Gamers, start your Enjins: In this 7-minute video, the COO and CTO of Enjin discuss the progress of their core NFT products.

Don’t be evil: Dapper Labs partners with Google to help scale development on the Flow blockchain.

Immutable raised $60 million in a Series B to continue its production of “tools that mainstream developers can use to build NFT games without ever having to worry about blockchain.”

Nothing says “Dad” like a lawn mower: in another example of bottom-up game development, the CryptoDads NFT project announced a Lawn Mower Racing game for all CryptoDads holders to play and earn $CDAD token.

Stardust raises $5 million to advance its mission to deliver no-code solutions for game developers to create and manage NFTs (among other things).

Turning shit into sugar: CRAFTLAND launches new platform that allows people to “recycle” shitcoins built on Ethereum or TRON for tokens that can be used in CRAFTLAND’s pet collection games.

Attention all MetaMask users: watch this if you want to protect your MetaMask wallet from hackers. 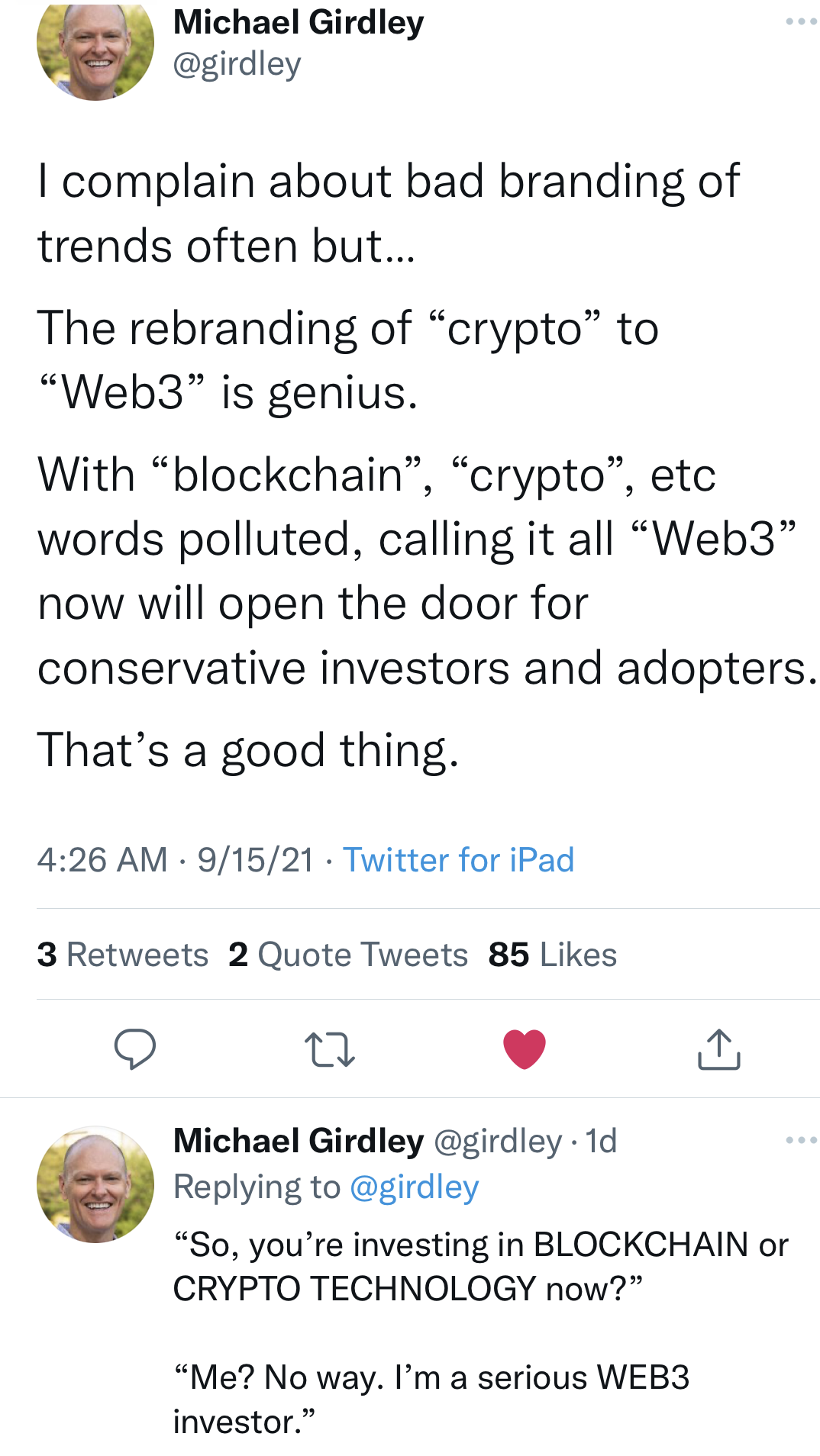 The Stupid Shit (Crypto Slang of the Week)

REKT: wrecked because the person lost a lot of money

NGMI: “not gonna make it”

“Dude, I spent my entire rent on this penguin-themed altcoin before the market took a shit. Then the dev team stopped posting on Telegram and Twitter. I got rekt.”

“Have you checked our CRAFTLAND’s altcoin recycling platform?

Shoutout to the Mint Calendar NFT newsletter for putting me onto Wanderers.

The sci-fi theme, animations, music and colors caught my attention, but it’s the community, storytelling, and worldbuilding that’s keeping me engaged.

What happened to Warp Squad? Who are the Wanderers? What do their planets look like?

I’m having so much fun with this project and it doesn’t even have a game (yet?).

I asked co-founder Nick Greenawalt for a quick blurb to include in this newsletter, and he said:

“In a world, where you could run a random name generator to make pfp project and become multi-millionaires overnight, one team who hates themselves decided to try wayyy too hard to make something cool.”

Holders get access to future NFTs, such as planets and avatars.

If you’re into sci-fi and are looking for a fun NFT project to join, consider becoming a Wanderer. Tap here to see the collection on OpenSea.

LET ME BE CLEAR: This is NOT a paid promotion nor is it financial advice.

PS – Can you forward this email to anyone you think would enjoy it?