PLUS: are you a wolf or sheep...the first playable NFTs in an AAA game...an Emmy-winning showrunner enters the world of NFTs...and more!

I almost didn't make the newsletter deadline today, but I PROMISED YOU I WOULD.

I'm using my condensed format, but one story I do want to expand on a bit is the one I mention in my subject line..."Apple Rugs Bored Ape Yacht Club" because it has huge implications for the future of blockchain games.

Basically, last month BAYC tweeted about a mobile game competition for BAYC and MAYC holders, along with a video trailer of the gameplay: 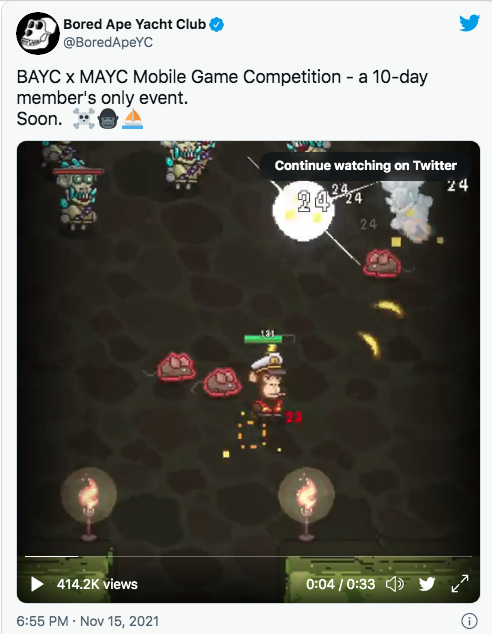 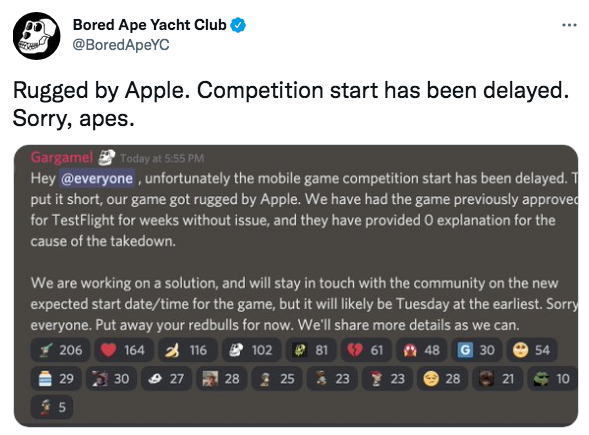 A big brain in my RECESS DAO discord (🧢,🧢) posited that "ultimately, any attempt at making crypto games on a native iOS app that involves purchases isn’t gonna get accepted."

Back in September, I argued that the ruling on the Fortnite vs. Apple case was huge because it meant that Apple can't block apps or games from using crypto payment networks.

What I didn't account for is that Apple could just block the game/app entirely.

Now, is this the reason the BAYC game "got rugged"? Did the game even "get rugged" at all, as they claim? What if development was really far behind and this was just an excuse?

Whatever the case may be, it'll be curious to see how Web3 games move forward if they still rely on walled gardens (such as the Apple ecosystem) for mass distribution.

Okay, that's all my smol brain can handle as far as original thought.

Let's get to the GameBites for this week.

🐺Wolf Game was (and still is) a big deal in p2e DeFi gaming for a while, with trading volume of almost 20k ETH and a ton of derivatives popping up

📺Emmy-award winner Bernie Su joined the Duskbreakers team, and I should also note here the Duskbreakers shipped a mini game as part of their an innovative Play-to-Mint strategy (more on that in the Deep Dives below)

🥑Blockchain gaming guild Avocado raises $18 million Series A round from Solana Ventures, Animoca Brands, and others

Thanks for sticking with me and I'll see ya next week with another edition!

Also – would you be interested in a job board for the Web3 game space?

I'm considering using this section right here to host it.

Let me know what you think about this idea!