As I mentioned yesterday, I am the proud daddy of a newborn baby girl.

I haven’t been getting much sleep lately, which is why I was behind on this week’s newsletter.

But just like parents of newborns, the crypto and NFT worlds don’t sleep.

So here I am, finally back in your inbox with another issue of the top news about Web3 gaming.

The major stories today are about 2 traditional gaming entities — Steam and Epic Games — and their respective stances on allowing blockchain games on their platforms.

🎮 Epic opposes Valve by allowing blockchain games on its platform

🍬MicroBites (other crypto gaming stories of the week)

🕳Down the Rabbit Hole (deep dives)

ICYMI: The ultimate thread on the intersection of Web3 and gaming

The biggest news coming out of the crypto gaming world this past week is the decision by Valve to ban all blockchain games from its Steam gaming platform.

According to its updated Rules and Guidelines, Steam now prohibits “applications built on blockchain technology that issue or allow exchange of cryptocurrencies or NFTs.”

Steam changed these rules quietly, but the news got leaked on Twitter when SpacePirate Games tweeted that their blockchain game, “Age of Rust”, was kicked off the platform along with other blockchain games.

As of this writing, we still don’t have an official statement from Valve or Steam as to the reason why.

To read some theories as to why Valve did this…and what this means for blockchain games, read the full story here.

While Valve decided to ban blockchain games on Steam, its competitor, Epic (who created “Fornite”), told The Verge that it’s open to having “games that support cryptocurrency or blockchain-based assets” on its games store.

Epic’s CEO and founder, Tim Sweeney, tweeted: “Epic Games Store will welcome games that make use of blockchain tech provided they follow the relevant laws, disclose their terms, and are age-rated by an appropriate group.”

However, Epic still hasn’t wavered on its stance to not include NFTs in its own games.

Zed Run has deployed an in-game cross-chain bridge to allow players to transfer assets between Polygon and Ethereum.

PlayDapp, a blockchain gaming project that’s listed on Coinbase, will launch its play-to-earn RPG, “Along with the Gods: Knights of the Dawn” on October 27.

💰Animoca Brands raised $65 million from Ubisoft and others, bringing its valuation to $2.2 billion.

🤖Mark Cuban, Crypto.com, Alameda Capital, Dapper Labs, and more have invested in a $16 million round for Alethea AI, a platform combining NFTs with AI (I included this because we may see these AI NFTs in the metaverse or individual games).

At the Level Up KL game developer conference, Enjin CTO Witek Radomski discussed the future of NFTs in games and how Enjin’s tech stack helps developers integrate NFTs into their own games. 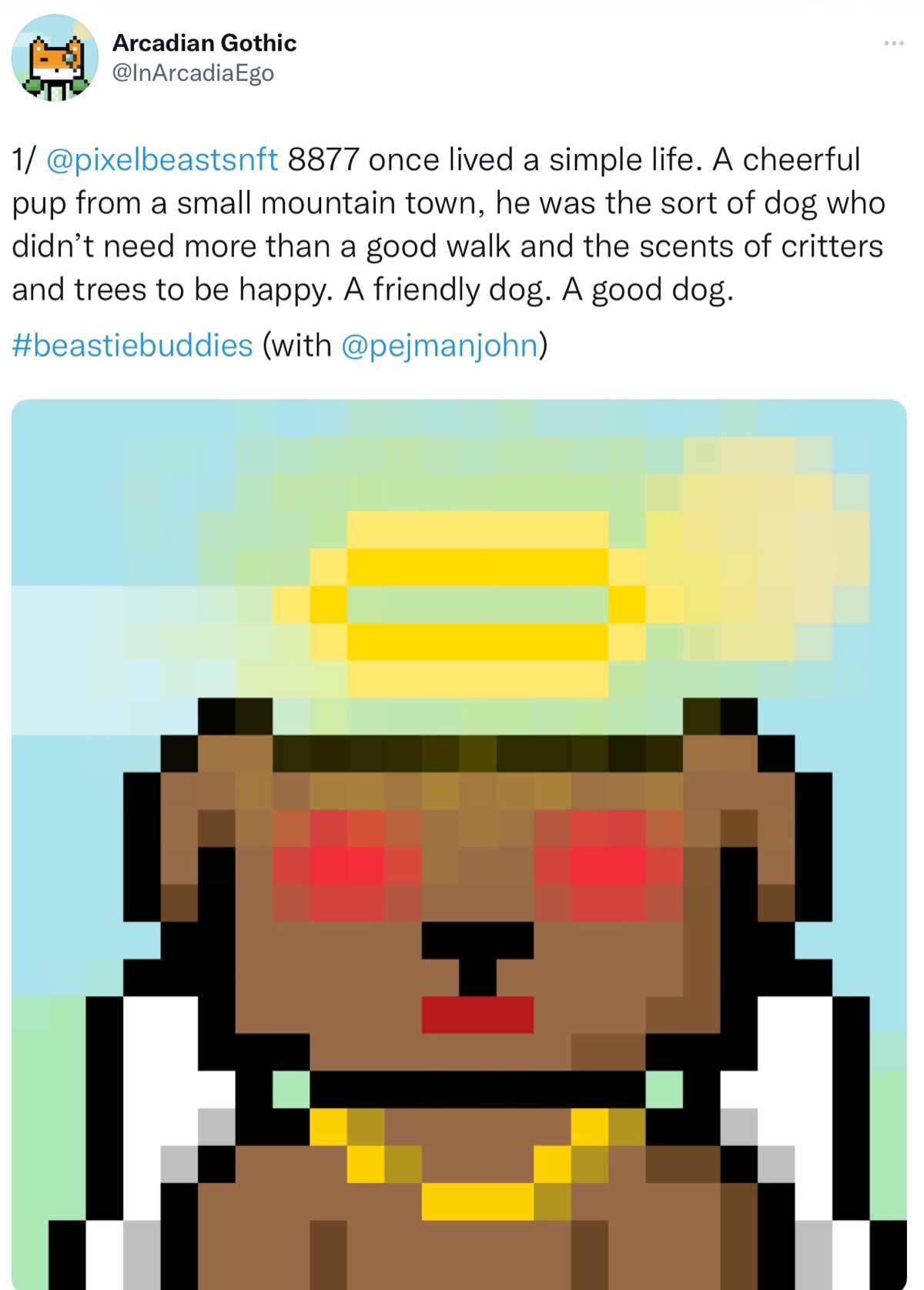 This 20-part story of PixelBeast 8877 is beautifully written, heartbreaking, and illustrative of the talent within the PixelBeasts community, so give it a read here.

Whether you’re new to Crypto GameBites or you’ve been here since Issue 1, please feel free to email me anytime with any questions, thoughts, and feedback.

I’m also working on Twitter thread on why AAA game publishers will most likely be slow to adopt blockchain and NFT tech, so if you want to see it first, follow me there. (If you’re not on Twitter, that’s okay because I’ll include it in the newsletter).