New Feature to the Email--Investment Opportunities

Been a long time since I've written anything other than Tweets--I apologize. A lot has happened and will probably get into it later, but this email is gonna be pretty badass.

Honestly, I haven't felt very inspired, but I had an idea this week inspired by @microacquire. It's a marketplace for SAAS businesses and the founder Andrew has been building in public.

So, anyway, I thought of something I wanted and put it out there. 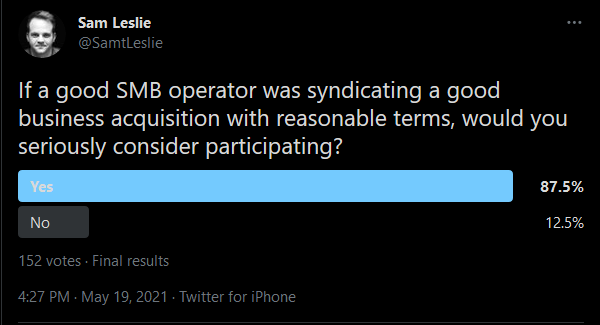 The results were a resounding "YES!" Looks like there are a bunch of people out there with cash wanting to take part in SMB acquisitions with Solid Operators. So, looks like an opportunity to me.

If you aren't familiar with Deal Syndication, its when a bunch of people or entities get together to buy a specific asset. It happens all the time in Real Estate and frankly, business acquisitions as well; however, there are places like Crowdstreet where you can find real estate syndications available for investment.

But, there really aren't any places for people to find Small Businesses to invest in or acquire alongside a solid operator & no place for an operator to pitch his business for a syndication.

So, I am deciding to test the waters with a friend of mine who has a deal under LOI and is completing Due Diligence.

Once he finishes DD, we will work together to present the deal to you. You will have the opportunity to reach out to him and work through the deal.

We are anticipating having the deal ready for syndication in the next week or so.

If he gets a good response from my list, then I will start building out a marketplace for operators to do syndications for Business deals/acquisitions.

There will be an annual fee to be a member and see the opportunities because I want to weed out those who aren't serious investors.

Also, there will most likely be a fee to list an opportunity on the platform.

Please let me know if you are going to be interested in this sort of thing or if you hate it. I'm building a separate email list for those investment opportunities, so let me know. But for now, I will combine the lists and you will see the opps.

Eventually, I want to take on Bizbuysell and the whole business broker system cause it is so broken and inconsistent.

Layne Mayfield
I love what you’re doing, Sam. Your Twitter alone has taught me a ton and I appreciate your consistent candor.